The collapse of the housing market in 2006 was the point of origin for the current recession which started in 2007 and progressively worsened into 2008. Some of the cause can be attributed to reckless lending which led to an unrealistic rise in asset prices. There is rhetoric the crisis was over by mid 2009. Yet 3+ years later, we are still faced with high unemployment, low consumer confidence, a dormant housing market flush with inventory and declining values, escalating federal debt, unstable financial markets, an indebted US economy, et al.

There are a number of factors that affect aircraft values and market price, some of which are beyond our industry and control, such as economic fundamentals and the financial markets. For example, as we discussed at an industry conference in 2009, there seems to be a direct corollary between the movement of the DJIA and pre-owned business jet selling prices, as was the case from 2000 into Q1 of 2009.  However, that changed by 2011 when the Dow nearly doubled from 6600 to over 12,000, yet business jet prices continued to decline.

Factors specific to the business jet markets that have an effect on value are percentage of the fleet on the market, days on market, number of transactions, and selling price. Usually when inventories decline, markets tend to stabilize. In our market, 5% of the available fleet is considered normal, as was the case in 2008. However, by 2009 the number had tripled and in some cases quadrupled, as shown in the random sampling of current generation business jets below. Year-to-date [2011] the percentage of the fleet on the market is below that in 2009 and running slightly under 2010, which could be a result of the number of aircraft withdrawn from the market this year, which is 208 for this random sampling alone.

Although ‘percentage of fleet’ serves as an indicator for market timing and to some extent market pricing, there are other criteria more specific to value. Usually as time on the market increases, selling prices soften, placing downward pressure on market values. The average days on the market has increased by more than 55% from 2009 to 2011.

Another data point to consider is the number of transactions within a given timeframe. The summer months are typically the slowest time of the year for business jet sales. However, as we review 3rd Qtr transactions (2011) vs. first 6 months activity, we see a paradox and in some cases summer transactions comprise 50+% of the total YTD activity.

Applying age-based depreciation to aircraft, assuming a 30-year life cycle and calculating the impact of major airframe / engine inspections on value, current generation business jets are selling on average 22% under a normalized market.

What is actually happening? Some older aircraft are reaching economic obsolescence, where based on their age they cost more to maintain than they’re actually worth. With future air navigation regulations and criteria, many may be forced into retirement. The good news is the number of transactions over the summer months were up; year-over-year pre-owned transactions are on the rise; and the percentage of the fleet on the market is on the decline. On the flip-side, the financial markets continue to worsen by the day; economic fundamentals are in the tank; and selling prices of business jets continue to decline. 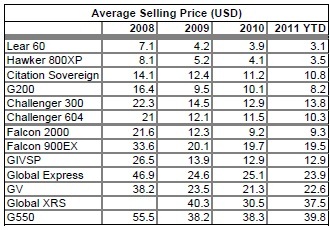 Typically, the higher the value of the asset the more willing an owner is to make a major capital expenditure (i.e., G550 EVS to SVS). However, as aircraft age and approach 20/30 year maintenance requirements, values diminish and owners begin to weigh their options. After all, an aircraft is built with a life cycle and time limited components, or in other words ‘a piece of metal with an expiration date stamped on it’. Avionics and equipment, on the other hand, will typically reach a point of economic obsolescence.

By way of example, when we consider an early Challenger 601 with an airframe inspection interval every 60 months (GIV – 72 months; Falcons – 6 years), the average cost of the first [5 year] inspection was $75,000. When factoring the average utility of 450 hours per year and considering the engines have a 3000 hour [major] inspection interval, the first [midlife] inspection would come due in the 6th year at an average cost of $700,000. Further, considering an acquisition cost of $13M, the maintenance costs pale in comparison. However, as we increase time in service, scheduled inspection costs rise proportionately. The second 60 month/120 month airframe, including gear overhaul, averages $650,000. As well, downtime increases with each [major] subsequent event. Whereas the first 60 month may incur 10 days downtime, the 4th may require 8–12 weeks.

There exist various avionics retrofits for most older aircraft and certainly just as many looming on the horizon in an R&D or certification phase. For example, there is a retrofit [coming] available for the GV that would replace the SPZ 8500 series Cathode Ray Tube (CRT) displays with LCDs, the final cost of which is yet to be determined. However, the question becomes what are the benefits (lighter weight, less power requirements, greater capability, et al) vs. cost, as opposed to the return on capital expenditure.

Although there are benefits for incorporating the latest avionics, the return on expenditure can be elusive. There are older aircraft where retrofits seem to make sense due to the older cockpits becoming costly to support (economic obsolescence), but maintenance and corrosion issues can make it even more difficult for ongoing support (i.e., difficultly in procuring parts, increased downtime and costs for inspections…).

As aging aircraft and avionics issues (ability to add WAAS, ADS-B…) become more prevalent, owners can experience increased costs for airframe and engine maintenance; greater market time at resale, increased downtime and higher pre-purchase inspection costs. All of this occurs while the debate lingers, what is the return on capital expenditure? 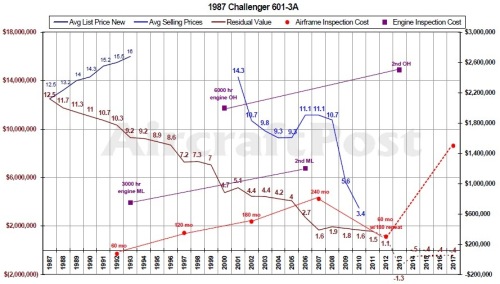 Although an industry-wide recovery remains stalled, it appears that select markets for newer, later generation (current production) business jets are showing signs of stability in market price, reduced inventory levels and absorption rates. However, the market for out-of-production aircraft remains unstable with no shortage of inventory and concern for continued deterioration in market price.

Since the recession began 3 years ago, pre-owned market prices have fallen severely. Absorption of inventory is one key to improvement and current levels for out-of-production aircraft are still showing 10% of the available fleet with absorption rates averaging 21 months, in spite of most of these aircraft now priced commensurate with market. Still, tight lending standards for older aircraft (10+ years) and a fear that prices will keep falling are keeping many buyers and lenders at bay.

The debt ceiling fiasco, decrease in consumer spending, high gas prices and unemployment are all contributors to our market. In many respects the pre-owned aircraft market seems to be running hand-in-hand with the housing market: prices have fallen from their peak, mortgage rates are at rock bottom, but few can take advantage of the situation due to tightened lending standards.

Year-to-date transactions for out-of-production aircraft are up 10% from the same period 2010, while actual selling prices continue a downward trend.  Excluding depreciation, 2011 selling prices have decreased 10%. A contributing factor could be attributed to economic obsolescence.

Sales for the majority of current production [pre-owned] aircraft are down 10% while selling prices are showing a slight increase. This uptick could be due to a recent bout of irrational spending for select models. 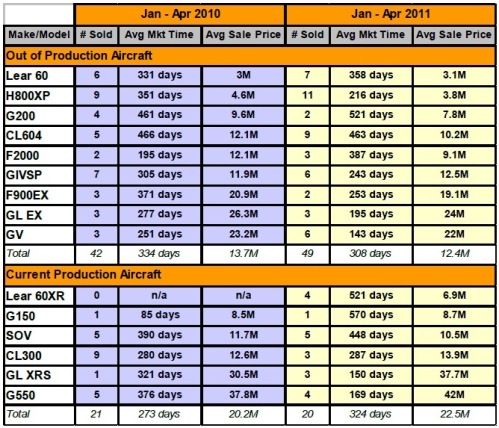 Pre-owned business jets showed an increase in the number of sales for 2010 over 2009 and 2008.  Taking a random sampling of medium and long range aircraft, the number of transactions was up an average 30% over 2008, although selling prices dropped an average of 56%.  One reason for the increase in transactions could be the result of prices going from ridiculously high levels to a level that makes sense again.  Affordability is a very attractive metric right now when considering shipments of new business jets in the first 9 months of 2010 were down 20% from 2009, 616 to 491 respectively (source: GAMA).

A number of factors can be tied to these results.  Market values are down an average 24% from 2008, resulting in greater value for the dollar which in turn creates a value proposition with some aircraft that is very attractive.  Also average time on the market has increased from 139 days in 2008 to 248 days in 2009 and 344 year-to-date, which also contributes to falling Market Price.

From an economic perspective, despite the downturn and continued sluggishness, major business publications report merger and acquisition activity up 28% over last year.  The majority of these deals (92%) are companies buying companies vs. private equity involvement (the former leading to a more stable business fundamental).

The business jet market is in a slow-moving recovery with selling prices hovering at the low end.  The vast majority of those who purchased pre-owned aircraft 3 years ago owe more than their aircraft are worth.  However, we need to be careful and not look at 2007 / 2008 as the normal market to return to, because prices were not normal, they were inflated.  On an optimistic note, being at the low end of pricing can be positive in that it can be viewed as one of the signs to a recovery.

Aircraft with the right mix of cabin comfort, range, technology and price point are showing signs of stabilizing. But older aircraft that are near economic obsolescence continue to lag, not only with potential buyers, but lenders as well. With the later generation aircraft selling 25% below a normalized market, residuals may seem to be on the low side today.  However, should prices return to normalized levels, residual values will also rise, putting those doing deals today in a favorable position.  For a discussion on transaction data and residual values, contact AircraftPost.com.

The market has declined significantly in the last 2 years, yet owners continue to insure their aircraft for valuations in effect before the price drop.  The right amount of insurance to carry on your aircraft is the amount it would take to purchase another aircraft exactly like yours.  Owners are saving thousands in premiums by adjusting their hull value commensurate with replacement costs.

For a ‘real time’ valuation, supported by detailed fleet statistics and transactions, contact us at intell@aircraftpost.com.  See firsthand how owners are better managing their costs of ownership. 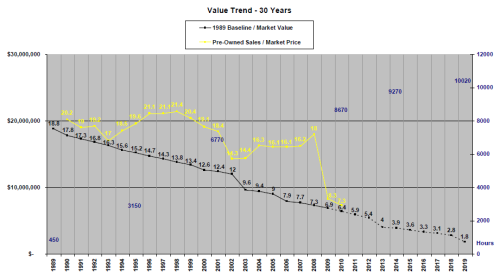 As a consequence of the global recession, new aircraft sales are declining and the paradigm seems to be returning to North America as demonstrated by later generation pre-owned aircraft.  In a random sampling of 114 business jets (Hawker 800XP thru G550) sold from January thru July, 82% were sold into North America.  This could be attributed in part to some manufacturing returning to North America or as a result of market prices aligning more with market value. 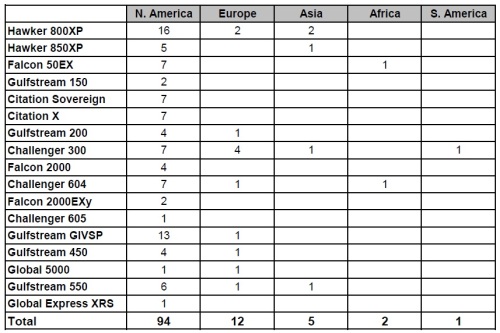 The Importance of Realistic Pricing

The average market time (calculated from when the aircraft enters the market to closing) for medium and long range business jets has increased two-fold, when compared to 2008.  However, aircraft that are realistically priced are selling in a reasonable amount of time and fairly close to their asking price. Similar to the real estate market, you would not price a house today at 2007 prices. For sellers to determine market time and pricing, they should completely understand the market for their aircraft as well as competing makes/models — not just what is on the market now, but what sold, for what price and why. If sales continue at their current pace, it would be safe to assume the confusion of 2009, as illustrated by the higher spread between ask/selling price, is beginning to subside. 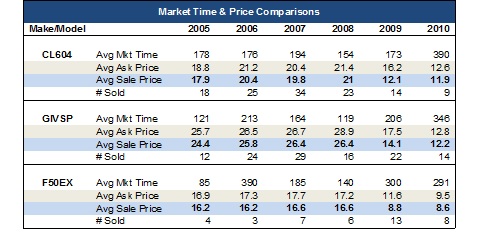 Business Jet Imports on the Rise in Canada

Import of new and pre-owned business jets to most countries is on the decline.  However, in Canada, whose economy added 93,200 jobs in June and GDP rose to 6.1%, business jet imports are on the rise. 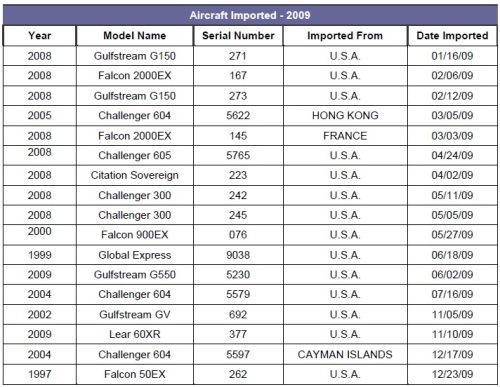 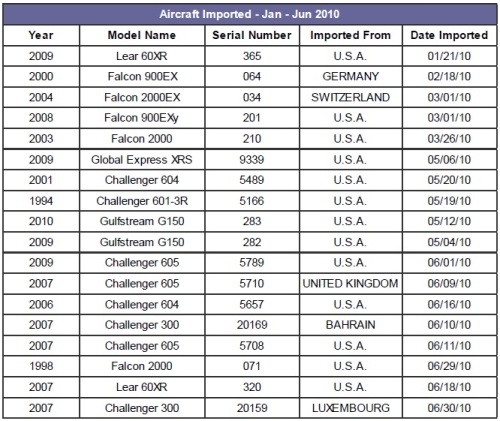 Market Price (selling prices) declined only 12% from 2009, compared to the 50% decline in 2008. However, Market Prices are still an average 20% below Market Value (generated by applying standard valuation practice / depreciation to the original cost new).

As of the end of June, the absorption rate, time required to sell the current inventory based on sales activity, improved slightly showing an average of 29 months, down from 30 at the beginning of the year.

The AircraftPost Blog
Blog at WordPress.com.